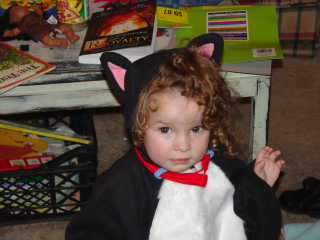 This is a bit long but so very very worth reading...I received it from a friend! I needed that lift at the end of the day!

If you have raised kids (or been one), and gone through the pet syndrome including toilet flush burials for dead goldfish, the story below will have you laughing out LOUD!
Overview: I had to take my son's lizard to the vet. Here's what happened:
Just after dinner one night, my son came up to tell me there was"something wrong" with one of the two lizards he holds prisoner in his room. I put my best "lizard healer" look on my face and followed himinto his bedroom.
One of the little lizards was indeed lying on his back, looking stressed.

I immediately knew what to do."Honey", I called, "come look at this lizard!" "Oh my!" my wife diagnosed the problem after one look."She's having babies.' "What?" my son demanded. "But their names are Bert and Ernie, Mom!"
I was equally outraged. "Hey, how can that be? I thought we said we didn't want them to reproduce," I accused my wife."Well, what do you want me to do, post a sign in their cage?"she inquired. (Actually she was being sarcastic.)":No, but you were supposed to get two boys!" I reminded her, (in my most loving, calm, sweet voice, while gritting my teeth).
"Yeah, Bert and Ernie!" my son agreed."Well, it's just a little hard to tell on some guys, you know," she informed me. (Again with sarcasim)
By now the rest of the family had gathered to see what was going on. I shrugged, deciding to make the best of it.
"Kids, this is going to be a wondrous experience, I announced. "we're about to witness the miracle of birth.""Oh, gross!" they shrieked.
"Well, isn't THAT great! What are going to do with a litter of tiny little lizard babies?" my wife wanted to know.
We peered at the patient. After much struggling, what looked like a tiny foot would appear briefly, vanishing a scant second later."We don't appear to be making much progress." I noted."It's breech," my wife whispered, horrified.
"Do something, Dad!" my son urged."Okay, okay" Squeamishly, I reached and grabbed the little foot when it appeared again, giving it a gentle tug. It disappeared. I tried several times more with the same results.
"Should we call 911?" my eldest daughter wanted to know."Maybe they could talk us through the trauma."(I think I was picking up on some similar sarcasim)
"Let's get Ernie to the vet." I said grimly. We drove to the vet with my son holding the cage in his lap,"Breathe Ernie, breathe," he urged."I don't think lizards do Lamaze," his mother noted. The vet took Ernie back to the examining room and peered at the little animal through a magnifying glass.
"What do you think, Doc, a C-section?" I suggested scientifically.
"Oh, very interesting," he murmured. "Mr. and Mrs. Cameronmay I speak to you in private for a moment?"I gulped, nodding for my son to step outside.
"Is Ernie going to be okay?" my wife asked."Oh, perfectly," assured the vet. "This lizard is not in labor.In fact that isn't ever going to happen.. Ernie is a boy. You see, Ernie is a young male. And occasionally, as they come into maturity, like most male species, they um..um..have certain changes, and he was just...." He blushed, glancing at my wife.
"Well, you know what I'm trying to say, don't you Mr Cameron?"We were silent, absorbing this.
"So Ernie was just..just...excited." my wife offerred....Exactly!" the vet replied, relieved that we understood. More silence. Then my viscous, cruel wife started to giggle...And giggle, and giggle some more, and then to even laugh loudly.
"What's so funny?" I demanded, knowing, but not believing that the woman I married would commit the upcoming affront to my flawless manliness.
Tears were now running down her face. Laughing "It's just...that...I'm picturing you pulling on its..its...teeny little..."she gasped for more air to only bellow in laughter even more.
"That's enough" I warned. We thanked the Vet and hurriedly bundled little Ernie and our son back to the car. He was glad everything was going to be okay.
"I know Ernie's really thankful for what you've done, Dad." he told me.
"Oh, you have NO idea," Closed mouth, my wife agreed, then collapsing in laughter again.
2 lizards - $1401
cage - $50
Trip to the Vet - $30
Memory of your husband pulling on a lizards teeny winkie...Priceless!!
Moral of the story - finish biology class - lizards lay eggs!!
Posted by kellygirl at 9:16 PM 2 comments:

I have so got to get my act together. I wanted to link my Wordless Wednesday to the others. I wanted to do a Thursday Thirteen. I had things I wanted to post about but never got the chance to...cause I forgot what they were! Well I also want to loose about 30 lbs. So we'll just have to add a whole bunch of stuff to the New Year resolutions list...if I can remember....

What I could not forget to post about though was my own personal cheer squad that I have! Yesterday when I came home from work, my kids called me to the back yard. They had me cover my eyes until they were ready. When I opened them my two eldest Miss A (8yrs) and Young Mr C (6) were standing with their backs to me about 15 ft away and about 5 ft apart from each other. Then Young Mr C turns around with a jump and has a large clump of dandelion buds (white) and he yells out M-O-M-M-Y...MOMMY!! Then Miss A does the same and has the same in her hands but she yells out L-O-V-E Y-O-U....LOVE YOU!! and in comes Little Miss A (3) and she tries to spell her name, shouting all the right letters but in the wrong order!! Then following her is Little Miss B (18m) and she shouts 1-2..1-2..1-2!! Then I clapped and told them it was so great! My dear friend Michelle asked me what the ocassion was....hmm...I had to just say...MOMMY!! I was the occasion! Now how cool is that?!

Gosh even reading it does not do it justice and it touches my heart in a way that only a mommy's heart can be touched. But I think you can understand how my heart melted and bubbled with joy at the same time!
Posted by kellygirl at 7:59 PM 1 comment: 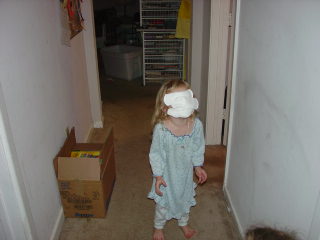 This is a classic case of "monkey see, monkey do". What is on their face? Well, I'll leave it up to you to figure out! 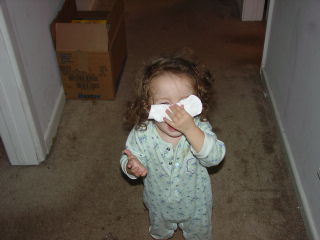 Wow...it has been 2 weeks since starting my new full time job as interpreter for the local school district. I really am enjoying it!
I am learning how to balance my time between family, work, sleep and all the other little things I want or need to do.
I do have to brag though. My husband wakes up in the morning with me and while I'm getting ready he makes our breakfast and coffee. He also packs my lunch the night before. Then after I go to work he homeschools our 8 and 6 year old and 'preschools' the 3 and 1 year old. He has also kept on top of the laundry and dishes and has dinner ready when I get home. Who could ask for anything more?!

My husband and my kids keep me going and really are my light and laughter....for example...
There is just something about my 3 ear old. She is so innocent yet funny.
The other night while bathing her and her younger sister. She says.."mommy, I got a buttcrack!.....do you have a buttcrack?"....um, yes honey, everyone has a buttcrack.
What I want to know is ....where in the world is she learning buttcrack?
Hmmm, underneath all my husband's wonderfulness....is he going around saying words like 'buttcrack'?
I'll have to check!
Posted by kellygirl at 8:21 AM 4 comments: